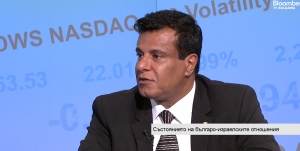 Mr. Avinoam Katrieli, the President of BCCBI, was a guest of Mr. Velko Kamenov on the TV show "In Development" on Bloomberg Bulgaria. They discussed the volume of Israeli investments in Bulgaria and Mr. Katrieli gave examples of successful sectors of mutual interest: building and management of large shopping centers, development of modern outsourcing activities (including in the sphere of medical services), investments in the high-paying IT sector. An example of a successful investment was the initiative of the Israeli company TEVA, the owner of Actavis, who prefers Bulgaria as a place to open a new IT center.

According to Mr. Avioam Katrieli, the new Bulgarian government sets a new logic for doing business in Bulgaria, according to which foreign investors need not only to return in Bulgarian business, but also to remain here. After his meetings with Boyko Borisov and some ministers, the President of the BCCBI is firmly convinced that if the government optimizes and improves the work of the state administration, Bulgaria will become more attractive destination for foreign investors.

Mr Velko Kamenov asked about the other two initiatives of Mr. Avianoam Katrielli - the return of Bulgarians from abroad through the “I Love BG” Foundation and the historic decision to create a new City of Dreams “Plana Heights". Mr. Katrieli reaffirmed his commitment to begin building of the new City „Plana Haights” this summer, pointing out that a dream comes true. "One can buy a house with 150 sq. m and 500 sq m yard at the price of 80 - 90 sq. m apartment in Lyulin. Everyone should be able to afford to live in a beautiful and green neighborhood" . The guest finished with optimism about future foreign investments in the Bulgarian economy.

The whole interview with Mr. Avinoam Katrieli can be found at the link: HERE

View the embedded image gallery online at:
https://bccbi.bg/index.php/component/k2/item/1106-the-project-plana-heights-should-become-a-flagship-for-investment-courage-in-an-uncertain-business1#sigProIdbd4abb8a65
шаблоны wordpress
Read 9734 times
Published in Gallery
More in this category: « BCCBI held a panel on topic: Legal and Tax Enforcement as a Factor for Improvement of Bulgarian Economy and Business Development Mr. Avinoam Katrieli, the President of the BCCBI, visited the event of Bulgarian Jewish community in which were conferred awards on former president Plevneliev and late Metropolitan Neofit »
Login to post comments
back to top